Ask Fish – Calling Guide ( No Not our Fish)

In line with my stated desire to improve the TF2 competitive landscape in South Africa, I started doing some research on the European TF2 scene. Here’s a great post by Admirable from Cadred.org. It begins with some stats from Steam detailing the number of regular TF2 players world wide now numbers over 100,000! It then leads into a tutorial on getting started in that dark and seedy place: the “TF2 Competitive Game” Check it out. 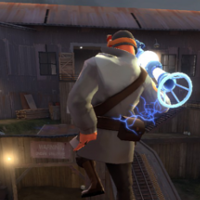 The much publicised emancipation of Team Fortress 2 has rekindled the flame of ambition amongst the competitive community, with a veritable smorgasbord of initiatives and campaigns being prepared to lure the fresh-faced punters in from the hedonistic free-for-all of the public environment to the joyless regimen of teamwork and tactics.

Ten weeks ago on a crisp summer evening when I first started sketching out this article the active number of Team Fortress 2 players just crept passed the 100,000 mark.

Looking at Steam Stats today I see we had a peak of 50,000. What does it all mean? Well apart from the fact that I have been doing fuck all for ten weeks, we can also deduce that the daily number of people playing TF2 has more than doubled since the game permanently dropped it’s asking price.

We were kings for a day.
With my window of opportunity to snaffle some new competitive players rapidly dwindling I wouldn’t even dare to speculate how the scene will progress from here, but the raw potential for growth is still undeniable. Let’s just hope those 30,000 new daily players aren’t all Chinese hat farmers…

If the title hadn’t already given it away, this article is aiming to make the process of getting started in the free-to-play revolution as painless as possible. I’m not going to mollycoddle you and spoon-feed you the basics of the nine classes or the seven game modes; the game is incredibly intuitive in its design, particularly for anyone with prior experience with online shooters. Rather I shall seek to furnish you with the tools you need to progress quickly and point you in the right direction if you want to make the jump to competitive play.

There’s no escaping it and there is definitely no shame in it; tearing it up on public servers will be your first port of call. To paraphrase TCM-Gaming’s legendary Demoman and 32-man-dustbowl-diehard, Ahmad ‘Byte’ Fansa – “If you can handle a thirty-two player public, then six on six will be a walk in the park”.

. Hell, I think I played public for nine months after release before I even realised there was a competitive scene… and I still do. A big part of it is finding the right server, so avoid those “fun” plugins and bots, filter for cp_ maps and if you see anything that says “saigns.de” on your server browser blacklist it instantly for the love of god, man!

It will quickly become apparent to you that team play is ingrained in the very fibre of TF2’s stylised world, from the health values and damage output of the myriad of weapons, to the rock-paper-scissors nature of the class system. This isn’t Counter-Strike or Call of Duty; you won’t see one player slaying a team without reloading… well… unless you play Demoman. Combat can be fairly drawn out at times, so knowing when to fall back or push your advantage can be just as vital as hitting all your shots.

If you’ve been playing on stock settings whilst you familiarised yourself with the fundamentals, now is the time to refine your setup and start looking for those competitive edges.

Change your Field of View

The default FOV is 75 with a maximum of 90, but playing in a widescreen resolution will increase your actual FOV to about 105. Custom resolutions can even be abused to extend your vision to Quake-like levels.

From the menu: None
From the console: fov_desired 90

Just like Quake you can enable hit beeps and even onscreen damage indicators so you can see and hear exactly how much damage you are putting out on a shot-by-shot basis.

True to it’s Quake roots, Team Fortress 2 allows you to disable your view models. In layman’s terms you can remove your weapon model and the associated effects from your view.

The prolific use of reload scripts provoked Valve in to making it an actual feature, enable this option and you’ll wonder how you lived without it.

From the menu: Advanced Options\Combat Options\Automatically reload weapons when you’re not firing
From the console: cl_autoreload 1

Enable this special tournament mode HUD and see your teams ubercharge, health and respawn times all in one place. Only when you’re dead though 🙁

From the menu: Advanced Options\Use advanced spectator HUD in tournament mode
From the console: cl_use_tournament_specgui 1

Enabling outlines for map objectives is a great way to keep track of dropped flags and bomb carts; it is effectively a wall hack for objectives but requires that you are running the game DirectX9.

From the menu: Advanced Options\HUD Options\Use glow effect for payload objectives
From the console: glow_outline_effect_enable 1

I don’t need to lecture the Cadred readership on the importance of a stable framerate, so do yourself a favour and download the definitive FPS configs from everyone’s favourite Übernerd, Chris, and profit.

Whilst the default HUD is very serviceable there are a plethora of options out there offer refinements from improved visibility and reduce clutter to numerical health displays and damage read-outs. BroeselHUD is my weapon of choice but I see a lot of the cool kids like Qun.TV using Garm3nHUD; there are hundreds out there to choose from!

In the three plus years since Team Fortress 2’s release the competitive rule set has gone through a slow metamorphosis to distil the six-a-side standard that is played today. When you make the leap from public to competitive play, you will notice that the randomness has been largely taken out of the game; no random crits, no random damage, fixed spread for hitscan weapons and a restricted unlock set.

Classes are also limited in the name of balance with Medic, Demoman and Heavy all capped at one per team and all other classes at two per team. The cookie-cutter team formation is Medic-Demoman-Soldier-Soldier-Scout-Scout with the accepted logic being that you have to have a Medic and a Demo because they are fucking imba and pad things out with Soldiers and Scouts as they the two most versatile classes in the game. The remaining classes come in to play on a per map or per control point basis, with Heavy, Pyro and Engineer brought out like an NFL defence line and Sniper and Spy for picks and assassinations.

Later, in the second part of this quickstart to competitive guide I’ll give you the full lowdown on the best places to play, watch and learn more about competitive Team Fortress 2. Watch this space…